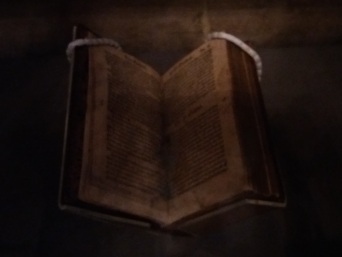 500 years ago a German monk nailed 95 theses to a church door with a moral force that cracked open the edifice of the Catholic Church to reveal a rotten interior. By disputing the power of indulgences (by which the Pope granted remission of the temporal punishment of sin in purgatory through the sale of certificates) Martin Luther kick-started the reformation, a religious revolution founded on the premise that believers could know God directly through His word and be saved by faith alone, bypassing a corrupted, omnipotent Catholic Church that had evolved into the sole purveyor of Christian truth and intermediary between Christians and God. Reformers not only questioned the basis of this authority but also condemned how the Church had exploited its position to accumulate vast wealth and power in an age when people were obsessed with the fate of their souls.

Luther’s influence is indisputable but not exclusive. Ideas and beliefs spread like seeds in the wind, taking root in new individuals before branching out in myriad directions. In Geneva, Calvin delivered another hammer blow to the crumbling structure of the Catholic Church by asserting that God has predestined the elect for salvation and the rest for damnation, rendering the Church’s core sacrament of penance obsolete. Meanwhile, in England, there was an unsung hero, who was long overshadowed by state reformers like Thomas Cromwell yet whose influence reverberated through the ages until now. This man was a translator, an unlikely hero in any age.

This translator’s importance is encapsulated in a tiny volume that recently went on display at St Paul’s Cathedral for the first time in the 491 years since 6000 copies of it were burnt ostentatiously on the Cathedral’s steps by the Bishop of London, fearing an immense power hidden within its pages that was belied by the book’s simple, unadorned cover. A frenzy of persecution by Church and State ensued that ultimately accounted for its author and all but three copies of his book.

William Tyndale’s 1526 translation of the New Testament into English was groundbreaking on several counts. It was the first to work directly from the original Greek texts, the first to be mass-produced on the printing press and the first to include Martin Luther’s commentaries. This explosive cocktail of reformist ideas, authenticity and marketing reach was revolutionary in a way that few translations could be today. Foxe’s Book of Martyrs (1563) quotes Tyndale as saying: “I defie the Pope and all his lawes . . . I wyl cause a boy that driveth the plough to know more of the Scripture, than he doust”. Tyndale completed this mission and, in so doing, supplanted the parish priest who for centuries had interpreted scripture for the plough boy and preached obedience to Church and State based on God’s award of spiritual and temporal power to Pope and King. The implications were alarming for both authorities. For if the foundations of this feudal fortress were weakened by the plough boy questioning his priest and his lord might not the structure collapse like a house of cards? For a king ensconced on the highest battlement, who in 1526 was yet to start his own reformation journey, this could not be risked or tolerated.

Ironically, in 1539, just three years after Tyndale pleaded at the stake for the Lord to “open the King of England’s eyes”, his prayers were answered and his work was vindicated as Henry VIII authorised the first-ever official translation of the Bible into English, a near carbon copy of the Tyndale Bible. Tyndale’s legacy was cemented by successive bible translations, culminating in the King James Version (KJV) of 1611. This became not only the most enduring version of the bible, but also the most widely read book in the English language and a translation that outsold every other right until the 1990s. As about 90% of the KJV New Testament is pure Tyndale according to computer-based studies, this all-conquering best-seller has constituted a chamber through which Tyndale’s words have echoed through the centuries to us, leaving an indelible mark on Christian discourse through words like atonement, thanksgiving and godless.

So why did a ‘mere’ translation have such deep and lasting influence? Essentially because Tyndale was an extraordinary linguist, fluent in eight languages and, like all great writers, with a talent for framing English prose in a simple yet engaging way that resonated with the masses. Subsequent scholars struggled to improve upon or challenge Tyndale’s translation because his work of genius was armour-plated with the moral authority engendered by his use of the original biblical texts, bypassing the Vulgate (the Church’s official Latin translation) with its language adapted to justify the Pope’s hegemony over the Christian world. Tyndale’s achievement is all the more remarkable in an age when translators were unable to draw on the wealth of dictionaries and online tools that we professionals take for granted today.

Impressive though his foreign language skills were, it is this translator’s influence on the English language, and by extension on how the world communicates today, that is his greatest legacy.  Literary scholar David Daniell coined the phrase “no Tyndale, no Shakespeare”, an exaggeration perhaps given his innate genius yet, like any writer, Shakespeare was a product of his age. And his age was a biblical culture in which children learnt to read and adults sought guidance through a book couched predominantly in Tyndale’s phraseology. Judging by the biblical references in his sonnets, Shakespeare was an avid reader of the English Bible and literary scholars argue that his style was influenced by the Bible’s modern, plain form of English, based on Anglo-Saxon constructs rather than the more flowery Latin ones typical of medieval English. Even today we hear Tyndale’s words on our streets, read them in our newspapers or hear them in song. Listening to Dylan sing “And the first one now will later be last, for the times they are a-changin” or Prince sing Sign o the Times, I can almost picture Tyndale sat in the studio harmonising with them.

To sum up, Tyndale powered Christian discourse through phrases like blessed are the peacemaker, driven not by filthy lucre but by his mission to fight the good fight and bring the word of God to the masses. Hounded by the authorities, he could have fallen flat on his face and been consigned to history in the twinkling of an eye. While his fellow monks ate, drank and were merry, Tyndale was buried in Greek and Hebrew manuscripts going the extra mile to uncover the truth of the scriptures, for seek and ye shall find. By the time the powers that be captured him and removed him from the land of the living, Tyndale had secured his legacy as the most influential translator under the sun. Through the best-selling book of all time, his phrases took flight and became a law unto themselves. They facilitated creative minds, gave voice to the salt of the earth and comforted the broken-hearted. It was a rare moment in time when a translation took centre stage and its translator became a hero without living by the sword or dying by the sword. And he still touches our lives today. Indeed, I could not have written this final paragraph without him.